Every person has a story. In Go MAD!, we hear the voices of ordinary people (like you and me) making a difference every day. Caroline Barnard, part of Everyday Southfields, is a Communications Officer at The Clewer Initiative. 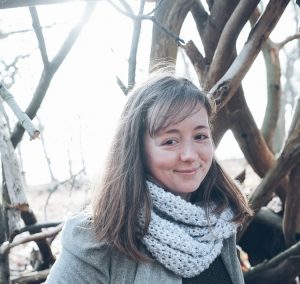 It’s something new within the Church of England, based around partnership and empowering churches and church networks to work together to combat modern slavery. We want to connect them to what is happening locally, raise awareness about modern slavery and how to detect it in their communities, and work in partnership with other organisations and public bodies. Modern slavery is a hidden issue, and eyes and ears are needed everywhere to identify victims.

What does your role as Communications Officer involve?

Day to day I’ve been working on launching a website, creating content, producing resources such as training and awareness raising materials for churches (whether for services, bible studies, children’s programs, etc). I liaise with other bodies and organisations, like the Independent Anti-Slavery Commissioner and the Human Trafficking Foundation, to make sure that what we’re doing is in line with other initiatives.

What have you been learning?

The breadth of it is surprising. It goes beyond sexual exploitation to people being made to work in car washes, nail bars, warehouses, cannabis farms, the agriculture and hospitality industry.

I met someone who worked at a company which makes automated car washes and he said that pre-2009, there were no hand car washes in the UK. Now there are almost 16,000, with many not adhering to environmental laws.

This is a bigger problem that we think it is. It is not something that happens far away to people who are not like us. It can happen to anyone of any race, nationality or gender. No one is immune. We are benefiting from modern day slavery in the goods we buy, even something as simple as salad in a bag.

What motivates you in your role?

Being involved in bringing an end to such an obvious injustice. Poverty and development is a multi-faceted issue; the classic story is of someone promised a better life, a job, who has been lied to, has their liberty and, sometimes, control of their own body, taken away. It feels ridiculous that we wouldn’t want to be shouting out about it. God has made us all uniquely and in His image and the fact that someone would take control over your individuality and personhood is abhorrent. Victims are often betrayed by someone they know and trust: a friend, boyfriend or family friend. Sophie Hayes is a British woman who was trafficked and enslaved by her boyfriend when a one week holiday to Italy turned into a six month ordeal. The vision is to end human trafficking and bring back dignity to survivors.

What can we do as individuals?

We can pray. We can educate ourselves about the problem nationally and internationally. If we’re buying cheap goods and not asking where they’re coming from, we’re part of the problem. We can lobby MPs to ask more questions about the issue in Parliament, we can contact the businesses we use and buy goods from (banks, supermarkets, clothing stores) to ask about their supply chain and what they’re doing to combat modern day slavery. Asking questions can be really powerful and effective. We can get involved in victim support and care; though helping in safe houses is very specialized, anyone can have a coffee with someone, help them with their English, or put together clothing and hygiene product packs for survivors, as the Mothers’ Union has done in Derby.

“‘Is this not the kind of fasting I have chosen: to loose the chains of injustice, and untie the cords of the yoke, to set the oppressed free and break every yoke?'” Isaiah 58:6.

At Everyday Wimbledon, we have links with Refuge Homes Merton, which extends friendship, support and welcome packages to victims of human trafficking or domestic abuse. Please contact us if you’d like to get involved. This Sunday 5 November, you can join us at Everyday Kingston to join a conversation about the fight against modern slavery in Cambodia. There are other churches and organisations doing much needed work in this area, and if you’re involved, we’d love to hear about it.